I haven't disappeared off the face of the earth...

We got there about 11pm. Finn was in pretty good spirits. I actually told him at one point that he should have the decency to act sick since he was costing me big bucks. We waited about 45 minutes to get into triage. From triage we went directly back to the back. Which kinda terrified me because normally your wait in our ER is from 6 - 8 hours. His oxygen saturation was 92%, his breath rate was 49, his pulse was super high, and he had developed a fever that he hadn't had all day. We waited for a little while in a room that I swear was at least 90 degrees! Great for a little boy with a fever lemmie tell you! The nurse's name was Paul. He was great! So helpful and very nice.

Then we went for a chest x-ray.

Do you know how they give infants chest x-rays? 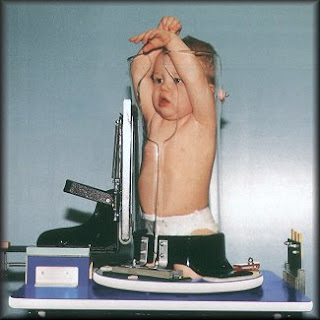 Medieval torture device anyone??? They put their little legs through the bottom then make their poor mommies stretch their arms above their heads while they close that clear plastic around them. Then their poor traumatized mommies have to leave the room while their sad little babies scream like their being murdered so they don't get irradiated. I'd have totally taken some radiation to be able to at least be where he could have seen me. He was sooo sad and terrified!

Then after that, we went back to the room and gave him a breathing treatment. Keeping a mask on a 15 month old for long enough to do a breathing treatment is very unpleasant. I had to hold his arms locked to his side while the nurse helped me hold his head. This took about 5 minutes, which of course felt more like 2 hours with him screaming and flailing around.

So after that he started breathing a little bit easier. So the nurse came in and did another temp and oxygen sat. His temp, even with tylenol, had gone up to 102. So he got some Motrin after that, and his Oxygen saturation had only come up to 93%. We saw the doctor a little while after that. He told me they could see a small pneumonia on his right lung, which was pretty obvious since I could actually see it when she checked to make sure his xray had worked. He told us we'd wait a little while and see if his saturation came up and his temp went down. An hour or so later, it had come up to 95% and his temp was down to 99.7. So he got a big nasty shot of antibiotics. This caused about an hour of screaming until he finally passed out about 4am. Then the nurse came in with a prescription for antibiotics and an inhaler, and we got to go home.

So that's what I've been doing this week. Fun Fun! My Mommy came up to help me take care of them. I love my mommy!

Oh and did I mention that I'm sick too!?
Family and Friends Finn Nicky

Katie J ♥ said…
Oh my goodness that is a wild contraption! Sheesh!

Julia said…
You are back in sickness HELL. The hospital is no place to be right now if you can avoid it... I so, so, so feel bad for you and I am sending positive thoughts to you and your little guys. Rest when you can. Eat well. Get better soon.
October 27, 2009 at 10:47 PM

Anonymous said…
NOOOOOOOOOOOOOO. Make the sickness end. Every where. It must stop.

Frogs in my formula said…
That picture sends chills down my spine. Hope everyone is on the road to recovery...
October 28, 2009 at 7:23 PM

Julia Phillips Smith said…
I have such a warped and twisted sense of humor - I laughed when I saw the picture of that kid in the medieval torture device. But only because I used to be a nanny and have done my share of holding tiny flailing people while trying to help them get well.

Lesley Speller said…
Katie: *whispers* I think everyone is pretty well now. *Gets a GIANT Stick and beats the hell out of some wood*

Julia: Hope you're feeling better too! Yeah, I certainly wouldn't have been in the hospital if I could avoid it!

Frogs: I think they are! Thanks! *Gets the big stick out again and goes after the wood*